When I look around the blogosphere I see so many beautiful memories of my father. I've been spending all day reading what he meant to people, the ways in which he inspired them to learn about science and critical thinking, or compelled them to go on a voyage of discovery about the universe. It's deeply moving, and I'll forever be grateful. For my blog entry, I won't tell you about his many scientific achievements or about all the good he did for this world–there are others who are blogging about this far more eloquently than I ever could. Instead, I'm going to share dad memories with you. He was many things to many people, but he was my dad and I want you to know the man I knew.

He had a knack for pinball, knowing just how hard to bump a machine without tilting it. We'd go to arcades together and he'd win bonus games like mad. Videogames were never his thing, though he could appreciate the better ones. I remember the day I showed him Computer Baseball, a strategy game for the Apple IIe. You could pit some of the greatest teams in MLB history against each other. We played Babe Ruth's 1927 Yankees against Jackie Robinson's 1955 Dodgers for about an hour, and then he turned to me and said, “Never show this to me again. I like it too much, and I don't want to lose time.”

Often he'd be invited to speak at an event, and I remember sitting with him, watching him gather his thoughts in the quiet moments before he'd take the stage. He'd make tiny notes on an index card. Just a word or two about each point he wanted to make. And armed with these notes, he'd go up and captivate the audience. Never a boring moment, never a time when he'd lose his place or go off track. As a child I'd sometimes think of him as a translator or a code breaker. How else could he turn those mere fragments into such amazing and inspiring ideas?

He was never without a dictaphone. Vividly, I remember those small black tape recorders with their bright red record buttons. We could be walking or talking and an interesting thought would come to him. He'd excuse himself, hold up an index finger to say he'd be just a minute, reach for the dictaphone, and then lay out his idea. Now I'm a writer and I use dictaphones, too. When I use them, my words usually come together like this: “Okay, for the book, I think it might be really cool if so-and-so does this instead of that…” And later on I'll work that idea into what I'm writing. By contrast, I remember my dad would speak in long, flowing, perfect paragraphs. He'd say it just right and it would go straight into the book. Sometimes he'd have a thought, speak a paragraph or two for one book, and this would in turn inspire a thought for a separate project, so he'd reach for another dictaphone, and so on. He always knew how to make the most out of the times inspiration would strike.

You probably already know this, but he was fantastic in a debate. He could take William F. Buckley's arguments apart, and as a kid I quickly found that my “Why you should buy me a cool dirt bike” arguments weren't nearly as good as Buckley's. But he always listened. He always gave me credit for making valid points. And eventually I did find myself biking around Ithaca.

He was deeply supportive of me. Even in the times where I worried him–dropping out of high school, for example–his belief in me never wavered. I remember him looking out for me. At the same time, he was adamant about not helping me too much. He didn't want to spoil me, and he wanted to make sure I could achieve my goals on my own without even a hint of nepotism. When I look back, I have tremendous respect for how he did this.

He had a genuine interest in people. I hear many conversations today where someone asks about another person, but it's just a courtesy–they're not really interested in the answer. This was never my father. He was always curious to know what things were like for his fellow man. In Manhattan, we could get into a cab, and maybe the driver would recognize him and maybe not, but my dad would start up a conversation and they'd get into really interesting discussions about the course of human events. The driver could hail from anywhere in the world, and Dad would know a lot about what was happening there. I remember thinking he knew more about Ghana than most Americans knew about America. And what he didn't know he wanted to find out.

I remember arguing with him about The Simpsons and Beavis and Butthead. Both shows made a bad first impression on him. I persuaded him to give The Simpsons another chance, and he eventually saw what all the fuss was about. He grew to genuinely enjoy the show. I don't think I ever won him over on Beavis and Butthead though. “They're not meant to be role models,” I remember protesting. “It's a subversive critique.” Nope, not his cup of tea. I can only guess what he'd have made of Family Guy or South Park. We also went back and forth on violence in the media. I argued that edgy films and TV shows were just a reflection of our society, and were not contributing to real life violence. He wasn't so sure. We went round and round on this many times. A really good, spirited disagreement, where each of our positions would evolve from what the other would say. I miss those times. Now that I think about it, that's part of the reason why I enjoyed the IS ART THE INSPIRATION FOR MADNESS? panel back at Worldcon so much–exploring those same questions with Joe Haldeman and Tim Powers stirred up great memories of my dad.

He had incredible patience. His fans would constantly come up to him to ask him questions, to ask for an autograph, or to ask to take a picture with him. Sometimes this would happen at an inopportune time–if we were out to dinner, enjoying a conversation, for example–but I don't remember him ever treating anyone disrespectfully. As a small child, he had such passion for science–he wanted to know why things were the way they were–and he held on to that passion his entire life. This made him deeply sympathetic to anyone interested in learning. They were kindred spirits, and he wanted to share all the joys and wonders of the cosmos he'd come to understand.

We loved basketball. We'd watch NBA games whenever possible, wondering if this would be the year Patrick Ewing would lead the Knicks to the championship. And always the answer would be no. He'd point out the coaches and tell me what they were like as players back in the years before I was born. When a visiting player went up to take a foul shot, the home team fans would make noise and wave towels trying to distract him, and dad never liked that. I remember saying it gives teams an incentive to win home court advantage, but he objected on principle–he didn't think it was sporting. There's something so decent about that. And I remember my mother getting increasingly upset because she wanted me to go to bed, but dad and I were watching a game and he'd promised I could stay up until the end. Overtime. Then double overtime. Then triple overtime. Man, what a game. (Game 5, Celtics-Suns, 1976 NBA Finals.)

He did not like the movie Aliens. I thought it was fun, scary, cathartic; he thought it was needlessly violent and why must extraterrestrials be portrayed in such a negative light? He had mixed feelings about Star Wars. I remember watching it with him, and when we reached the part where Han Solo brags that the Millennium Falcon made the Kessel Run in “less than twelve parsecs,” he made an exasperated sound. I asked him what was wrong, and he explained that a parsec is a unit of distance, not time. I said, “Dad, it's just a movie.” He said, “Yes, but they can afford to get the science right.” And I thought, yes. He's absolutely right. (What movies did he like? He was a big fan of David Lean epics like “Dr. Zhivago” and, especially, “Lawrence of Arabia.” I remember how he loved that transition where Peter O'Toole blows out the match and we cut quite suddenly to the Nafud desert. It's such a powerful moment.)

He'd make very interesting noises. His laugh was explosive and uninhibited. It was the kind of laugh that made you feel good for making him laugh. His sneezes were booming. And sometimes he'd talk to animals in their native tongue. The times we'd see dolphins, he'd greet them in a reasonable approximation of dolphin speak. They'd often answer him. I have no idea what was said. But my favorite sound of his was the sound he'd make upon discovering something interesting and new, some idea or possibility that impressed him or opened up a fresh way of looking at things. It was a kind of “aaah.” One of my proudest moments: We were watching my first Star Trek episode, “Attached,” and within minutes he'd made the sound, turning to me with a beaming smile and saying, “That's really good.” And this continued for the entire show. The completeness of how much he loved what I'd done, that genuine sense of enjoyment stays with me, a sense of respect and approval I treasure like nothing else.

He drove an orange Porsche 914 with the license plate, “PHOBOS.” Named after one of the moons of Mars. I never asked him, “Why Phobos? Why not the other moon, Deimos?” though I wish I had. As a child I was fascinated by Greek mythology and knew Phobos as a demigod of fear. It's ironic because my father was the least fearful person I've ever known. Though he worried about the state of the world from time to time, it never stopped him. And when we'd talk about what things might be like in twenty-five, fifty or a hundred years, he said he knew there would be difficult challenges ahead, but he believed we were up to the task. He believed in human ingenuity and compassion, in thinking long-term instead of short, in putting our many differences and superstitions aside. He believed in a better tomorrow. He believed in us. 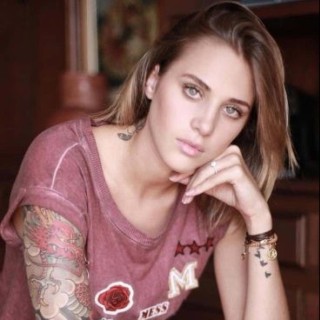